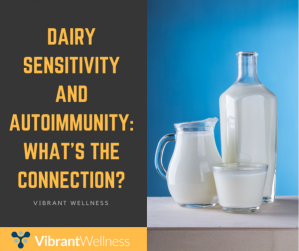 Kefir. Homemade yogurt. Ghee. Have you heard of these referred to as healthy alternatives to conventional dairy?

Traditional health advice tells us that we need dairy for strong bones and healthy teeth. Is this the truth? What are the health benefits and health consequences of dairy consumption?

Throughout history, mothers have breastfed their young. A mother’s milk helps promote rapid growth and weight gain. The protein content and easy digestibility, for most babies, is beneficial to us when they are young and maturing [1].

Beyond breastmilk, which is not technically categorized as dairy, milk products have only been in human diets for approximately the past 7,000 years [2]. There are actually a number of benefits that dairy can provide.

For instance, fermented dairy products provide us with beneficial live cultures that support digestion and immune balance. Almost every agrarian society in the world has evidence of a traditional fermented dairy-based food.

Dairy has also been linked to anti-inflammatory benefits in metabolic disorders, as well as inversely correlated with risk for diabetes and CVD in adults [3].

One of the drawbacks to dairy, however, is that casein, the main protein found in milk and other dairy products, can be a trigger for inflammation in some individuals. Casein has a similar molecular structure to gliadin, the main protein in gluten responsible for most gluten-sensitivity, and 50% of people with celiac disease also appear to have a sensitivity to the casein protein in cow’s milk dairy [4].

Because of this structural similarity, dairy is often considered a food that one must avoid when attempting to calm the inflammation of autoimmune disorders.

Let’s dive a little bit deeper into why this may be.

In the case of molecular mimicry, a foreign antigen shares sequence or structural similarities with human self-antigens (molecular mimicry is also known as antigenic mimicry).

An antigen is any particle that the body identifies as ‘non self,’ or foreign. This might include food proteins, bacteria, viruses, endotoxins, and any other chemical ingested or inhaled.

Self-antigens are proteins in the human body that belong to us, and which should not be identified as foreign, but, during autoimmune reactions, these self-antigens come under attack by the body’s immune defenses.

Although the exact mechanisms remain unknown, there is a growing body of evidence indicating that some autoimmunity may result from molecular mimicry between the gluten protein, gliadin, or the enzyme transglutaminase, and various human tissue antigens, including nervous system proteins [6].

Another milk protein, butyrophilin, may mimic the human protein myelin oligodendrocyte glycoprotein (MOG) in the central nervous system and play a role in autoimmune encephalomyelitis, optic neuritis, and multiple sclerosis [7,8].

The authors concluded the demonstration of molecular mimicry between alpha-gliadin, cerebellar peptide, milk butyrophilin, and MOG, and the simultaneous detection of antibodies against these proteins may have broader implications in the induction of neuroimmune disorders, especially in the presence of existing central nervous system inflammation and blood brain barrier disruption.

What this means in plain terms is that in some susceptible individuals with aberrant immune responses, gliadin (from gluten) and casein (from dairy) may play a role as autoimmune triggers to neurological autoimmune conditions.

Furthermore, as loss of immune tolerance and susceptibility can be influenced by multiple factors, including an individual’s genotype, the timing and level of wheat and milk protein exposure, and the health of the gut and blood brain barriers, these complex interactions deserve further study.

What about ghee and yogurt?

The removal of proteins in ghee (clarified butter) can be a safer alternative for some people who have trouble tolerating dairy products because of specifically a casein sensitivity, however, not all the other proteins are removed completely, and there may still be some minute residual protein left in the final ghee product.

Yogurt, while providing important live bacterial cultures that benefit our intestinal microbiome, may also be a problem for some individuals who are cow’s milk sensitive. While yogurt’s lactose content is very low, and, therefore, can be better tolerated by those with a lactose intolerance (which is not an immune reaction to dairy), it does still contain all of the proteins found in dairy.
Because of this, if you are sensitive to any proteins in dairy, avoiding yogurt made from cow’s milk is recommended.

It can be very confusing to determine which foods are good for us and which foods to avoid. Fortunately, there are lab tests out there that can help guide us toward finding the right individualized diet, as we are all different and should not follow a one-size-fits-all approach when it comes to our diets.

To learn more about testing available for both dairy sensitivity and gluten/wheat sensitivity, and the potential autoimmune connections they have, check out Vibrant’s new Dairy Zoomer (coming soon!) and the Vibrant Wheat Zoomer, available for order through participating healthcare providers.

9. Vodjani A, Kharrazian D, Mukherjee PS. The prevalence of antibodies against wheat and milk protein sin blood donors and their neuroimmune reactivities. Nutrients. 2014;6(1)15-36.